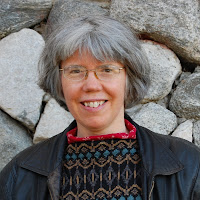 Artists have created countless versions of Jesus Christ, each adapted for a particular audience and era. There is black Jesus, Asian Jesus, female “Christa” -- and now gay Jesus to heal the damage done in Christ’s name. Queer Christian images are arising now because the conventional Jesus is no longer adequate. Christ’s story is for everyone, but lesbian, gay, bisexual and transgender (LGBT) people often feel left out because conservatives use Christian rhetoric to justify hate and discrimination.

The artists who dare to show Christ as gay have had their work destroyed -- if they can find a way to show it at all. They have faced censorship, controversy, hate mail, violence, death threats, and/or vandalism that destroyed their work. The most vicious opposition comes from the religious right, but some were also criticized by feminists and queers for being too Christian. The queer Jesus lives in the fertile, uncharted zone between two almost irreconcilable opposites: too gay for most Christians, but too Christian for most of the LGBT community.

The new visions can free the minds of viewers and start to compensate for institutional religion’s past biases and omissions. Looking at them makes it easier to recognize the face of God in LGBT people and others who have been excluded. Sometimes even devout Christians are unable to see God’s image in people who are strangers to them. Sometimes queer people are blind to their own sacred worth as incarnations of the divine. But the unexpected grace of an artist’s vision may open our eyes.

The gay Jesus images may come as a shock, especially to those who believe in the divinity of Jesus Christ. Some denounce them as blasphemy as religious freedom clashes with freedom of expression. Many, myself included, experience them as a blessing that enhances Christian faith by embodying God’s wildly inclusive love for all. It is appropriate for Christians to explore Jesus’ same-sex attractions because in him God became flesh -- a total, shocking identification with all people, including the sexually marginalized.

Nobody knows for sure whether the historical Jesus was attracted to other men. Being human, Jesus must have had sexual feelings. Being divine, Christ lives in every individual of every different variation of sexual orientation and gender identity. The Jesus of scripture broke gender rules and gender roles. He befriended prostitutes, lepers and other outcasts. He challenged traditional family values at almost every turn, ignoring his blood relatives in favor of those who became his “brothers and sisters” by loving God and neighbor. Jesus himself was charged with blasphemy. He taught love and justice and was killed for it. Gay Jesus images are not a reaction. They are a revelation.

I first discovered the wealth of gay Jesus art in 2005 when I began looking for images to go on a website announcing my book “Jesus in Love,” (http://jesusinlove.org/newbook.php) a fictional autobiography of a queer Christ. I was amazed to discover that while I was writing my novel, artists all over the world were also portraying the queer Christ. There were paintings, sculptures, photos, a play, and books of anthropology and theology. I was part of a global movement! I eagerly began contacting these kindred spirits, most of whom did not know each other.

The artists turned out to be a diverse group. They are women and men of various races and ethnicities who come from all over the world. Each arrived at the revolutionary images in a unique way over the last 30 years. They run the gamut from well established to emerging artists. They stand both inside and outside the institutional church. Their religious backgrounds include Buddhism, Judaism and other traditions as well as Christianity. 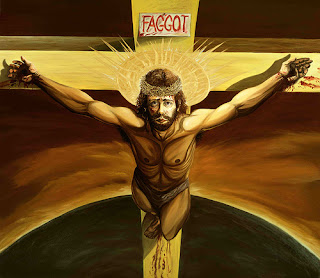 Contemporary artists find many ways to interpret the gay Jesus. Most common of all is the crucifixion. Queer people can relate to the hurt and humiliation that Jesus experienced on the cross. The ultimate example is “The Crucifixion of Christ” (top left - http://www.beckijayne.com/pages/crucifixion.html) by Atlanta artist Becki Jayne Harrelson. Jesus hangs on a cross below a sign with the anti-gay slur “faggot.” She painted this stunning crucifixion through a steady stream of tears over human cruelty. “Look at the word ‘faggot’ on the cross. You could substitute the word ‘nigger,’ ‘Jew boy,’ ‘honkie,’ ‘redneck’ or ‘bitch’ -- it all means the same. Anytime anyone rises up in condemnation, hatred, or violence against another, Christ is crucified” she explained. 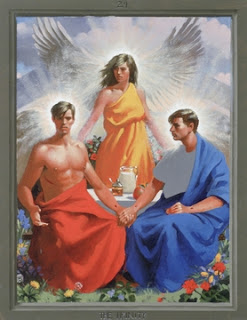 New York painter Douglas Blanchard goes beyond the crucifixion to explore the resurrection in his epic 24-panel series “The Passion of Christ: A Gay Vision.” He paints Jesus as a contemporary gay man who stands up to priests, businessmen, lawyers, and soldiers -- all of whom look eerily similar to the people holding those jobs today. Jesus is jeered by fundamentalists, tortured by Marine look-alikes and rises again to enjoy homoerotic moments with God and friends. The final painting, “The Trinity,” (middle left - http://www.facebook.com/people/Doug-Blanchard/734128653) shows the Holy Spirit protecting a gay couple. The two men are Jesus and God, holding hands in a colorful land of milk and honey.

One of the most notorious gay Jesus projects is “Ecce Homo” (below left - http://www.ohlson.se/utstallningar_ecce.htm) by Swedish photographer Elisabeth Ohlson Wallin. She recreated 12 scenes from Christ’s life using contemporary LGBT models and locations. Her method resulted in stunning images such as Sermon on the Mount, which shows Jesus with gay men and lesbians clad in full black leather with chaps, chains and harnesses. Her “Ecce Homo” series toured Europe, often in churches, but the Pope expressed disapproval by canceling a planned audience with the Swedish archbishop. Opponents vandalized the art, threw rocks at the artist and issued death threats. This kind of religious bigotry is exactly why the queer Christ is needed. 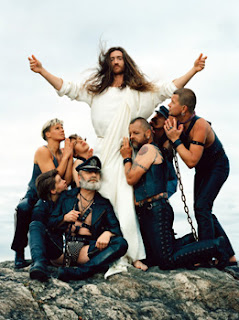 With so much opposition, gay Jesus art has not reached all the people who need to see it. I decided to gather these beautiful, powerful, sometimes shocking images for all to see in my book “Art That Dares: Gay Jesus, Woman Christ, and More” (http://jesusinlove.org/art-that-dares.php). Artists keep making new queer Christian images, so I post them as they happen at the Jesus in Love Blog (http://www.jesusinlove.blogspot.com/). I believe that the Christ who inspired the new images will speak directly through them to bless everyone who sees them.


Rev. Kittredge Cherry is a lesbian author and art historian who blogs about LGBT spirituality and the arts at the Jesus in Love Blog (http://www.jesusinlove.blogspot.com/). Her books include “Art That Dares: Gay Jesus, Woman Christ, and More.”
Posted by Marie at 6:49 PM