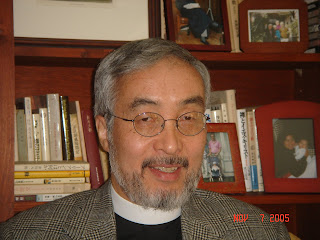 This is a reflection offered by the Rev. Dr. T. James Kodera, Professor of Religion at Wellesley College, five days after the earthquake that struck Japan on March 11, 2011.

It is at times such as these that we see ourselves standing before our Maker, no matter what our heritage. There is so much to say, but we find it difficult to put words to our raw feelings. Do we have to say everything for us to be heard by our Maker or by each other? A Hindu prayer reminds us: “Oh Thou before whom all words recoil.” We can hear each other without words. Our Maker certainly knows our helplessness and our cries for help, in the silence we keep, in the tears we shed, in the warm embraces we exchange on this day and the days to come. Our Maker hears us, reaches out to us and comforts us in our solitude and also through the circle of friendship we form, a bond that shall not be broken.

Sixteen years ago in 1995, I shared with the Wellesley College community what it was like to be in Kobe when an earthquake reduced the city of 1.5 million to rubble and claimed 6,500 lives. It was the worst earthquake since the Great Kanto Earthquake of 1923 that claimed 140,000 lives in Tokyo and its vicinity. Kobe and Kanto were magnitude 6.8 and 7.9 earthquakes, respectively, on the Richter scale. The quake that hit the Tohoku region of Japan on March 11 registered 9.0. Unlike the other two earthquakes, the Tohoku earthquake was followed by a tsunami with tidal waves nearing 30 feet. Once the tsunami got going, we are told it accelerated to a speed comparable to that of a jet airplane. That is why it took only six or seven hours for the tsunami to reach the islands of Hawaii.

We will not know the final death toll of this earthquake. The nuclear power plant in Fukushima Prefecture continues to heat up, leaking radioactive fumes and liquid. The reactors shut themselves off when the ground first shook, as they were designed to do. But the structure was damaged so badly that they could not be cooled. Uranium, like the heat of the sun, supplies inexhaustible energy, but it also brings radiation. After the atomic bomb we were told plant life would not return to Hiroshima for a hundred years. But today, as the students who were there in January know, the Peace Park in Hiroshima is covered with grass and trees and flowers. Would this happen to Fukushima? Chernobyl, the site of the worst nuclear disaster to date, has remained uninhabitable since 1986.

Kobe is where I grew up in junior and senior high school days. After walking several hours after the earthquake, seeing train tracks twisted like spaghetti and roads turned into raw sewage, I found my parents and grandmother huddled together in a house with no external wall on one side, just like a Hollywood movie set. And old lady next door had been crushed by the heavy roof tiles and died. After a few hours of sleep without water, food or heat, I went to the Ward Office to do volunteer work. Because of my height, they promptly put me in charge of telling people at the entrance not to bring any more dead bodies there. My job was to direct them to different makeshift facilities where the dead could be properly cremated and buried. I could not return to Wellesley for the start of the spring semester. The college President encouraged me to stay in Kobe as long as I needed. I finally left Kobe for the airport on the back of a scooter, driven by a friend. Since then, Kobe has been rebuilt with the latest technology, guaranteed to withstand another earthquake 6.8 or worse.

Japan is earthquake prone. Twenty percent of all the earthquakes that registered higher than 6.0 on the Richter Scale have hit Japan. Massive tidal waves are known by their Japanese name: tsunami. This time, the earthquake, the tsunami, and the nuclear fiasco are the worst in Japan’s history. The Prime Minister declared that it was the greatest disaster since World War II. The Emperor of Japan, Akihito, spoke on television yesterday. No emperor of Japan has ever spoken on television before.

The speech recalled to many the day after Japan’s “unconditional surrender” in August 1945, when Emperor Hirohito spoke on the radio, commending his subjects who had “endured the unendurable” during the War. This time, his son, Akihito said he was “deeply worried “about the ongoing nuclear crisis at several stricken reactors and asked for his subjects to act with compassion “to overcome these difficult times.” He also thanked over 90 nations that had offered to help.

Natural disasters bring out the best and the worst in human nature. What is particularly moving is that the people of Korea and China, who have legitimate gripes against Japan for its war-time atrocities, were among the first to arrive to help.

Endless television coverage has also shown the orderly behavior of the Japanese, even after their loved ones have been washed to the sea or buried in the mud under the rubble, and their houses gone. So far, there have been no instances of looting or fighting. A friend in Tokyo reported that it took four hours to drive eight miles, bumper to bumper. And yet, there was no honking. A Wellesley alumna relayed to me that Diane Sawyer, Wellesley Class of 67, who was in Japan as a television reporter, was offered food by the victims of the earthquake and tsunami. Speechless, she simply wept.

Some 50 workers at the nuclear plant in Fukushima have been hailed as heroes. They remain at their work place, trying with all their might to cool down the reactors, minimizing the damage to others, while they were being exposed directly to radioactive materials.

In sharp contrast, after the Great Kanto Earthquake 89 years ago, some Japanese turned against the Koreans living in Japan, accusing them of poisoning the well water. And they went on a rampage, killing the Koreans on the streets. It continued until a police officer told the angry mob to bring a cup of well water allegedly poisoned by the Koreans. In front of everyone, he gulped down the water. There was no poison.

Japan once sought to compete with Western nations through military buildup and colonial expansion has since turned itself into a peaceful nation, using technology and trade in international competition. Secretary of State Hillary Clinton, Class of 1969, remarked two days ago that since Japan is one of the most generous nations in the world in times of need, the United States should do all it can do to help Japan. Perhaps the ugliest is what we have seen on some Websites in the last couple of days. Some Americans have linked the disasters in Japan to Pearl Harbor. For them, it is “pay back time.” Is it, really?

A continent and an ocean away, what can we do? What should we do? That is where we find ourselves helpless, speechless, standing in front of our Maker. Be a friend, comfort one another, renew our hope that love conquers hate, hope overcomes despair. Our good will reach across the globe, and touch those who need us.

Fukushima means the “island of riches.” Today, it is an island isolated and rich with radiation. Tomorrow, we pray that it will be an island rich with affection and hope.

*The Rev. Dr. T. James Kodera is the Chair and Professor of Religion at Wellesley College. He is also the Rector of St. Luke’s Church in Hudson, Massachusetts and the President of the Episcopal Asiamerica Ministry Council.
Posted by Kwok Pui Lan at 7:12 PM