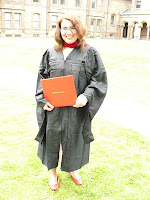 by Rosemarie Buxton
There's no divorcing social justice from Christianity. When I was at the Episcopal Divinity School, I heard my professor, the Rev. Ed Rodman, put it something like this: "Charity without justice is just an empty promise." About five years ago, I began a journey that has taught me the truth of those words.
I had been invited to an event held by an interfaith community organizing group called the Merrimack Valley Project.  I didn’t really know what to expect, but what I experienced was a cross between a religious revival meeting and a union rally.
I learned that people in the Greater Lawrence and Lowell, Massachusetts areas were experiencing workplace injustice in Gillette packaging plants. I learned that residents of Lowell were concerned about gentrification and the lack of affordable housing. I learned that immigrants throughout the Merrimack Valley encountered discrimination and unfair treatment.
I was hooked, and over the next year or so, I became increasingly involved with the Merrimack Valley Project, but I remained unclear about exactly what was the source of the attraction for me.
However, the more I became involved, the more I realized that while service work is an important part of a call to ministry, calling attention to the larger issues of social injustice and trying to effect systemic change is an energizing and essential piece of our Christian commitment.
Today, I am president of the Merrimack Valley Project, and as I was developing my speech for MVP’s most recent action to support homeowners experiencing foreclosures, I talked about what I learned about charity and justice from the Rev. Ed Rodman.
My involvement with MVP has tied together my own roots as the granddaughter of immigrant mill workers in Western Massachusetts with the anti-oppression-based education I received at EDS.   The support and economic conditions that allowed my immigrant grandparents to achieve the “American dream” for themselves and their children – a union-protected job with fair wages, the move from tenements to a first home, a college education for a child – are becoming increasingly out of reach for today’s immigrant and working class Americans.
When Gillette and Proctor and Gamble used and abused so-called temporary workers (some employed for as long as six years!), MVP took action and organized for fair treatment, wages, and job security. When immigrants throughout the Merrimack Valley expressed concern about fair treatment by law enforcement, substandard school systems, and lack of access to legal resources, MVP held story forums between suburban and urban parishes and held an action of 500 residents calling for immigrant justice.
Today, MVP is acting in solidarity with homeowners and tenants facing foreclosures and evictions. Some homeowners are victims of the voracious and deceptive subprime lending market of the early 2000s. The newest wave of foreclosures is due to the financial crisis, which has resulted in many unemployed and underemployed homeowners. Many of them started out as well-qualified borrowers and now find it difficult to make their mortgage payments.
While CEOs of banks that received stimulus funds received record bonuses in 2009 and 2010, desperate homeowners filed mountains of paperwork to obtain modifications only to see the notice of the foreclosure auction of their home appear in the newspaper. In fact, MVP has even seen homeowners who are paying on their modifications receive foreclosure notices.
Apparently, the bail out applied only to the banks and lenders, not to their customers.  Meanwhile, neighborhoods are filled with boarded-up houses and uprooted families without a place to live. This system produces vacant properties that offer temptations to crime and vandalism, and families who become wanderers with decimated credit ratings, hoping to find rental property with landlords who will accept them.
The voices of the leaders of the Merrimack Valley Project demanded that legislatures pay attention to homeowners facing foreclosure and eviction. Together with state-wide allies and partners like City Life, we urged our legislators to pass the Massachusetts Foreclosure Prevention law.  As a result of that law (passed last summer) homeowners in default have up to 150 days to negotiate with the bank, and tenants in good standing can no longer be evicted from foreclosed properties.
At MVP’s most recent action, we called on our legislators to support two new laws that have been proposed. Massachusetts is one of the few states that does not require judicial process for foreclosure; the proposed new law would require a judicial mediator to sit down with the bank and the homeowner.  The second law, an Act to Prevent Unnecessary Vacancies in Foreclosed Homes, would allow former owners to stay in their homes and pay rent to the bank. This would help preserve neighborhood stability and prevent homelessness.  Already, MVP has received the commitment of the Massachusetts representative from Lawrence, Marcos Devers, to support this legislation.
As MVP continues to build its leadership and strength, we also continue to find new solutions, continue to hold banks accountable, continue to make our voices heard, continue to pray, and continue to hope. The voices of many people of faith, calling out for justice, can indeed move mountains, or in this case, the minds and hearts of our legislators.
Rosemarie Buxton received a Master's in Theological Studies at EDS in 2008, and sees her education and spiritual formation there as crucial to her passion for social justice.  She is originally from Chicopee, Massachusetts, and her grandparents were French Canadian immigrants who worked in the mills there.  She has been involved with MVP since the spring of 2006, and she has served as President for the past two years.

She is also a member of  Christ Episcopal Church in Andover, where she has been a mentor in the lay Christian formation program Education for Ministry for six years, and she has also served as a lay delegate for the Diocese of Massachusetts annual convention.

In addition to her role as a community organizer, Rosemarie also works as a teacher of ESL, English, and Writing at the University of Massachusetts, Lowell and at Hesser College in New Hampshire.