By Gale A. Yee 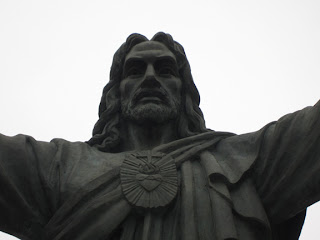 The Dushu Lake Church in Suzhou was our next destination in our fully packed schedule. We entered a spacious industrial park of manicured open spaces and a huge stone bust of Albert Einstein with his famous E=MC squared formula nestled beside it. A church here, in this strange locale? We spent a while looking for this church until we saw a steeple peeking out incongruously amid the modern sleek buildings.

Our bus was too large to enter the grounds, so we took off on foot. We walked to a very large pond of water lilies, surrounded by a wooden ramp which was our scenic route to the church. At the top of a set of stairs was a big bronze statue of Jesus with arms outstretched.  Something was vaguely familiar about this Jesus. Smack dab in the middle of his chest was this large heart. A statue of the Sacred Heart of Jesus in this post-denominational church!

As a former Roman Catholic, I often thought Protestant churches very spare. But here was a church with a Sacred Heart and beautiful stained glass windows of Old and New Testament bible stories. Stained glass windows were even in the lavatories. The women's room depicted Noah's ark. I had a chuckle when told that window in the men's bathroom was the expulsion from the Garden of Eden.

I was fascinated by these windows because I use a lot of art in my PowerPoint slides for my Introduction to Hebrew Bible and New Testament courses. Depicted in the church were the Garden of Eden, the temptation of Eve, the sacrifice of Isaac, Joseph interpreting Pharaoh's dreams, among many others. I noticed that these windows in the main church depicted the Bible characters as Westerners. However, the art in the basement of the church were by the Chinese artist He Qi, a former professor at Nanjing Theological Seminary. What a contrast! He Qi uses vibrant primary colors for his paintings. His Bible characters have stylized Asian features and were dressed in Asian costumes. My favorite windows were those of the crossing of the Red Sea and of Moses giving the Ten Commandments. Moses looks likes a stern Manchu emperor as he holds up the stone tablets.

Because the church served a highly educated intellectual congregation, it was important for the church to incorporate beautiful artwork in its construction. Each Sunday there are two services. The first is for the Chinese speaking community. One thousand people fill the main church and two chapels. The second service at 10:30am is English-speaking with about 350 attending from over 20 different countries. A pastor named Fr. Tom services this English congregation.

As I left the church I gazed again at the Sacred Heart and compared this Western Christ with He Qi's Jesus with his almond eyes, broad nose, and darkened skin. I prayed for more Asian Christian artists to come forth from the Chinese church to produce their own distinctive Asian Jesus!

Posted by Jeffrey Perkins at 10:39 AM