Dispatch from China: The Food of Shanghai

In the best EDS tradition of both/and, this trip to China is a feast for the body as well as the spirit. I should tell you that when I was accepted to this travel seminar, the first thing I researched was the cuisine of the various areas we were going to visit. I had hoped that I might, if I was lucky, get to taste one or two foods I read about. I did not expect that, by the end of our first full day here in Shanghai, I would have tasted so many of them.

In any other trip I’ve taken, the hotel breakfast alone would be worth a whole blog post. But for this trip, I will only say that if you imagine any breakfast you’ve ever eaten in any country, you could probably find it at this breakfast—I can’t even call it a buffet, more like 14 buffets. We were always looking at each others’ plates and saying, “Where did you get that?” to which my favorite response was “Over by the sushi!”

After church we came back and changed into tourist clothes, and our guide walked us over to Shanghai Old Town, an area that combines flea markets that are essentially wholesalers to other local vendors with stores for the tourist trade. These are mostly in “new” Shanghai Old Town, where all the buildings look like what you might imagine Chinese buildings from the 18th century would look like. Our guide pointed out a variety of US chain restaurants, but a number of us clamored for local cuisine.

The hard part about travelling in packs of ten or more is that most small local restaurants aren’t set up to handle groups that big (whereas Hilary Allen and TJ Tetzlaff went into a small place and ended up eating in the owner’s kitchen!). Someone standing next to us told us we should eat dumplings. “Yes, dumplings!” we cried. So our guide took us to the Nan Xiang Dumpling House, one of the best-known Shanghai dumpling houses. When we got there we were faced by a line of, I swear, at least 100 people waiting for dumplings. This was, thanks be to God, the take-out line—we were going upstairs to the restaurant proper, where, after only a short wait, we got a table that the 11 of us were able to squeeze around and bought what was effectively a dumpling tasting menu. 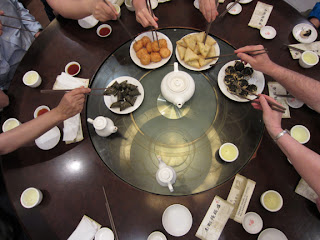 One of the Shanghai specialties I’d read about was the xiaolongbao or soup dumpling. These are made by taking thin wheat-based dumpling dough (think potsticker dough, only less dense), forming it into a pouch, filling it with soup, and steaming it. I had read that you bit a hole in the dumpling, slurped out some of the soup, and then ate the dumpling dough with the rest of the soup. One of our dumplings was clearly recognizable as a soup dumpling. It sat in its own little teacup-sized bamboo steamer, and poking out of the top of it was a red and white striped plastic straw, handily placed for soup slurping. The soup was a crab broth, and it was delicious. Little did we know that soup dumplings lurked under other guises. I bit into what was obviously a fried shrimp ball and showered Herb Sprouse with soup. We got steamers of what were clearly shui mai—only they weren’t, they were little soup dumplings, filled not only with soup but also with a meatball. We had soup all over the table with that round. At dinner Sunday night, the coordinator of our trip from the China Christian Council demonstrated how to eat these, warning us to be very careful because the soup inside was extremely hot. I felt the scorched roof of my mouth with my tongue and nodded sagely in agreement. 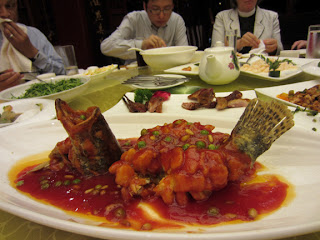 Which brings me to Sunday night’s dinner, at the Lu Bo Lang restaurant, in new Shanghai Old Town across the square from the soup dumpling place. Over 100 years old, this is one of the ten best restaurants in China, specializes in Shanghai-style cuisine, and has served a whole range of dignitaries over the years, including Bill Clinton. We had a private dining room with two round tables and a Lazy Susan in the center of each. And we were served what may well be the best meal I have ever had. There was the variety—20 dishes (yes, 20!). There was the presentation—a dish of baby bok choy about the size of my thumb, steamed perfectly to a brilliant green, and arranged in a beautifully symmetrical wreath with a crab sauce in the center. And a “river fish” that had been sliced almost all the way through, then battered and fried, then sauced with a sweet/hot red chili sauce. Served with the head and the tail and the red sauce, it looked like a dragon. And there was the orchestrated progression, from cold dishes to soup and lighter seafood and vegetable dishes, to heavier dishes like dressed duck and braised buffalo with vegetables, then moving to lighter, sweeter dishes like a sweet gelatinous rice cake, and ending with fruit. We were told that only when we see the fruit being served do we know that a banquet is over.

Some of the dishes were challenging—not everyone ate the cold marinated jellyfish, for example. And the hot duck dish, eight treasure duck, came with a rice dressing. I among others assumed that the focus of the dish was the duck, only to learn that the focus of the dish was the rice—the duck was mostly there to flavor it. These meals have been only one of the many ways we have revealed our ignorance, been blessed by the kindness of those around us, and had our cultural assumptions turned upside down. A feast for the mind and spirit indeed!

P.S. On Monday at lunch we were treated to yet another Shanghai-style feast. I now know that the number of dishes, the progression, and even the kind of dish is consistent. It too started with eight cold dishes, it too included jellyfish, it too had a baby bok choy wreath, but it was filled with sea cucumber (my first!) instead of crab, the whole fish was done in a casserole instead of looking like a dragon, and so on. It too was delicious, and most of us enjoyed it a great deal, but tonight a number of us went for very simple food in very small quantities.

[Editor's Note: In solidarity with the EDS China Travel Seminar, a group of faculty and staff went out to our local Chinese restaurant in Cambridge, Massachusetts for a buffet lunch on Monday afternoon. See photo right.]

Catherine Owens is a student in the MDiv program at EDS. She loves learning about a culture through the lens of what the people eat.
Posted by Jeffrey Perkins at 12:23 PM