Dispatch from China: Marco Polo and the Silk Road 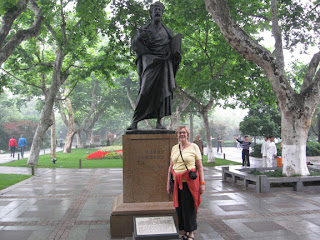 In his book about his fifteen years in China (The Travels of MarcoPolo), he called Hangzhou "the most beautiful city in the world," with its fine markets and beautiful gardens.  In fact in the 13th century China was far more advanced that medieval Europe.  Although we think of Marco Polo as a great traveler and explorer, he was also looking for new technologies and products. He and his father and brother were Venetian traders who followed the Silk Road into China, (the name for several ancient trading routes that ran from eastern Europe to Xi'an in western China).

Until our EDS group visited the Silk Factory in Suzhou (a city about thirty miles away from Hangzhou), I never realized how amazing it was that he was able to transfer silk technology back to Italy. It involved taking living silkmoths, mulberry trees, and the techniques of spinning the moth’s cocoons into silk thread and then weaving it into a silk textile. Today, the town of Como (roughly sixty miles west of Venice) is the center of the European silk industry.

Italians tell you that Marco Polo chose it because it had a similar microclimate as Suzhou for growing the Mulberry bushes and keeping the moths alive. How he managed to keep everything alive on the journey back is a great mystery. (The moths live only 25 days.) Cross-cultural exchange from China began very early.

Hangzhou may also have something to teach us today. At 6:30 in the morning the lakeside was buzzing with people walking and doing early morning exercises that included ballroom dancing, Tai Chi, Tai Chi with swords, and other exercises I don’t know the names of. But they were stretching and doing exercises that counteract all the backpains and shoulder aches that we Americans complain of.