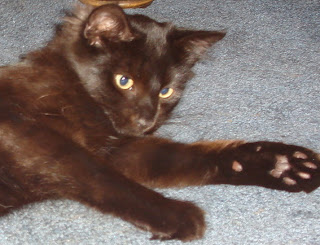 I don’t always talk like everyone else, even though I am a writer and an English teacher. Most people expect English teachers to use correct grammar all the time, and for the most part I do. But over the last three years, I have come to see my language as a potentially powerful site of resistance in the battle against the oppression of nonhuman nature. The pen and the tongue are more powerful than the bulldozer and the smokestack.

I did not change my language on purpose, not at first. It started in December 2008, four months after I adopted my cat, Musashi. As he grew from a five-pound, six-month-old black ball of fluff with a huge plumy black tail to a ten-pound near adult, it became very clear to me that he had his own likes and dislikes, his own habits and routines—in short, his own personality.

When I watched him hunt his catnip mice with such seriousness and then jump up to the window in awe at the first snowfall, it seemed to me that he had a very clear voice. So I started a blog for him, The Musashi Guide: One Kitten’s Opinions on Life, the World, Cat Toys, and Everything. I had been a creative writer all my life, so I did not think I was doing anything more than telling stories. I certainly didn’t think that I was doing anything remotely political.

It has only since I have been a Master of Arts in Theological Studies student at Episcopal Divinity School that I have begun to realize the potential political power of engaging in creative acts. And Musashi has been one of my teachers.

It started simple enough. I would write about his favorite cat toys and movie stars, and his preferences about the different hand lotions I used. Then came Christmas. Have you ever tried to explain Jesus to a person of another species using their language?

I didn’t think so. Let me tell you, it’s not easy.

From the start, I had been using the Internet phenomenon of LOLcats and the LOLcat “language” as Musashi’s style of writing. LOLcat, from the text-speak abbreviation for Laughing Out Loud, began in 2007 with the website Icanhascheezburger.com, which allows users to put captions on funny pictures of cats. The “language” is a combination of text-speak abbreviations, typing errors, baby-talk and kindergarten misspellings. Basically the assumption is that cats, if they could write, would write at the level of a five-year-old human child.

So far, so good. What I had not anticipated was the effect of trying to write from the point of view of a person (an individual with a unique personality) of a different species. In particular, since Musashi is almost fifteen inches tall, one-fifth of my height, he is quite literally going to experience the world from a different perspective. And because he is an indoor cat, the reality of the outdoor world probably does not mean much to him (chirping, tasty-looking birds notwithstanding).

Gradually I started realizing that he would have to describe the world much differently. Humans no longer would equal people. Suddenly, there are kittee people, doggee people, birdee people, etc.

“God” would equal “Ceiling Cat,” the Internet meme of a cat looking down from a hole in the ceiling. And why would Ceiling Cat have a human son? Could any nonhuman animal, aware of the cruelty of the human practice of factory farming, accept a human Savior?

And if Ceiling Cat’s son were a cat rather than a human, what would that mean?

I am not saying that this exercise changed my fairly orthodox faith. I am merely saying that my anthropomorphic exercise in seeing the world and my faith through the eyes of a person of another species changed how I will now forever after see my world.

First, I am seeing the earth as a subject; therefore, I must always now write it as “the Earth,” a proper noun referring to a particular planet. Now I say “he or she” and “who” of nonhuman animals, because from their point of view, they are males and females and individual subjects of their own lives. Now I refer to humans as humans, not as “people,” because I have seen how the possession of a personality is not limited to our species.

Now, I no longer speak like everyone else. I do it intentionally, and I think my cat, if he could understand these concepts, would quite likely approve. After all, he’s a cat, the center of the (his) universe. Just like humans.

*Susan Spilecki is a student at Episcopal Divinity School. She teaches writing at Northeastern University and the Massachusetts Institute of Technology. The Musashi Guide can be found at http://musashiguide.blogspot.com.
Posted by Kwok Pui Lan at 7:47 AM