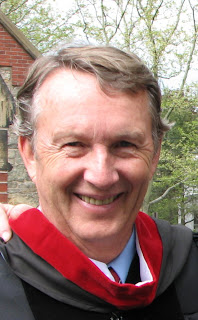 I cried when I heard the Rev. Peter Gomes, minister of Harvard’s Memorial Church, died last February. I am not normally emotional. I can hardly remember crying over anyone’s passing. But my tardy awareness of his leaving us, over three months late, struck me hard.

How can I explain it? I felt less embarrassed to be a human being knowing that I shared that species designation with him. I had been reading again, off and on, his Scandalous Gospel of Jesus recently, as though an angel had told me he was gone.

As I prepared an envelope and enclosed my book, How to Get to Heaven with a note about how I enjoyed his books and ministry and hoped he found my little tome pleasant, inclusive, and reasonable. I couldn’t resist a PS that said James Carroll thought it was great.

Then, looking up his address I got the news, perused the Wikipedia article summarizing his life and the brutal stroke, brain aneurism, and heart attack that took him a year before he planned to retire and a month or so before his Easter sermons.

I remember his graciousness when I met him a couple times at his Wednesday teas at his home just north of Harvard Yard, when I was at Episcopal Divinity School (EDS). I remember his wonderful sermons at Memorial Church and his wisdom when he shared the stage at Trinity Church’s remarkable 2006 conference on eschatology with Carroll, Jürgen Moltmann, and Barbara Rossing in New York.

But I remember most the wonderful, conversational way he wrote. His eloquence transferred to the written page seamlessly. It may be more accurate to say that he spoke the way he wrote. And imbedded in all he said or wrote was a deep wisdom, patience, and perspective.

And he lacked no courage. When he came out years ago it was in solidarity with embattled gay and lesbian students who were challenged on Biblical and cultural grounds through a periodical by fellow Harvard students. As a Republican American Baptist pastor who participated in both Reagan and Bush senior’s inaugurations, it came as a surprise to many that he would not only defend but identify by his own sexual orientation with the gay community.

When they invited him to speak with other administration and faculty members about the raging controversy, the organizers of the rally had no idea that they would receive not only a personal “confession” but a careful dismissal of the Biblical arguments against homosexuality. One may read of the whole episode in the chapter “The Bible and Homosexuality” in his wonderful bestselling The Good Book: Reading the Bible With Heart and Mind. This quote from those pages is worth repeating:

“I also knew that no one wanted me to be ‘religious.’ Religion, in fact, was part of the problem here and not part of the solution, or so it was thought by my secular friends. I knew all that, and yet I also knew that the only ground on which I could stand in this particular instance was religious ground, and so rather than a pious elegiac on civility, or an exercise in political outrage, I determined that I would make my best effort to represent my understanding of the Bible and the Christian faith as it applied to the heart of the present discontents. As the university’s pastor and preacher, as a Christian, and as a homosexual, I decided to reclaim by proclaiming a vision of the gospel that was inclusive rather than exclusive, and to do so as a Christian who was more than the sum of the parts of which I was made…I also wanted to win minds and hearts, or at least to awaken them, to a view of the Christian faith which in dispute valued charity and humility over mean-spiritedness and arrogance.”

It is remarkable, one might say destined or karmic, that someone with such a high view of Scripture was found in the center of this controversy in this place. What I love about Pastor Gomes speaking and writing is that he never second guesses the Bible. He takes it as he finds it and draws from it the lessons that it gives. While valuing Scripture, he is too intelligent to be drawn into the doctrinaire interpretations that have created such rancor in recent times.

As an older student (sixty-nine on graduation) at EDS, coming out of the evangelical community, having done my Masters in Theological Studies thirty years earlier at Gordon-Conwell, I had some anxiety about fitting into the community here. But when I discovered how much common ground I felt reading Gomes and Cox and others, I took courage. Listening to Bishop Steven Charleston preach and later receiving his warm endorsement of my book confirmed my decision to come here.

“On the issue of sexual orientation, I think it would be helpful if we would not be so obsessed with sexuality considered in the light of human anatomy. The psychological aspects of femininity and masculinity are far more important identities. And it is clear that everyone is a mixture of these two elements including the Godhead. How people are equipped physiologically need not always match their stronger psychological identity. Most of us would be androgynous physiologically if that were possible. We should not stand in judgment of the creation (which any biologist will tell us has huge variations in that regard), the Creator, or each other on this issue.”

We will miss him. He will be on my short list of those I would like to commune with in heaven, but I’m sure it will be a long line I will stand in.

*William Bronson, DMin ’08, was an airline pilot for many years and author of How to Get to Heaven.
Posted by Kwok Pui Lan at 8:33 AM