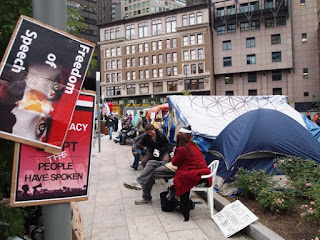 Brendan Curran, a senior M.Div Student at the Episcopal Divinity School (EDS), has participated in Occupy Boston since it started in late September. He is living in the tents in Dewey Square by South Station in downtown Boston, while continues to take classes and do his course assignments. Occupy Boston was inspired by Occupy Wall Street in New York.

EDS held a teach-in session on Occupy Boston on October 17, 2011, facilitated by President Katherine Hancock Ragsdale and Professor Ed Rodman, two veterans of social movements. The session followed a community Eucharist in which the Rev. Mwape Chilombo, a student from Zambia, delivered a powerful sermon on the need to take a new direction. She linked Occupy Wall Street with the struggles of Zambian people against government corruption and oppression.

About seven faculty, staff, and students have visited Occupy Boston, and participated in or witnessed the various demonstrations and marches. Sarah Monroe, who is doing field education at Ecclesia Ministries, a ministry for homeless people, said that homeless people feel welcome and supported by Occupy Boston.

Susan B. Taylor brought her family to visit Occupy Boston, together with members of The Crossing, an emergent church community in Boston. Her daughter was asked to share her experience upon her return with three different classes of her school in Western Massachusetts.

Other eye-witnesses were impressed by the toleration of diverse opinions in the general assembly, the decision-making body, and the diversity of people gathered, including students, homeless people, members of the labor unions, older people, and veterans of the civil rights movement.

Brendan Curran taught the hand gestures used in the general assembly to ask a question, to vote, to make a point, and to show disagreement. He was impressed by the collective and collaborative effort against capitalism at Dewey Square. “We do not want to become a political party or to be co-opted by a political party,” he said. The movement has been described as the “the return of the silent majority” by Time magazine. “It is exciting to see it go global,” Curran said. Occupy Wall Street has inspired protests and demonstrations in many cities worldwide on October 15, 2011.

The teach-in session provided an opportunity for President Ragsdale to share her rich experiences in organizing for social change. She said changes happened in 4 steps, which are not linear:
· Personal and spiritual transformation
· Educating others
· Lobbying and providing alternative proposals
· Civil disobedience
She said individuals and institutions can be involved in the different steps of the process and at different stages.

Some of the attendees said the Occupy movement does not have clear demands and a concrete platform and it is hard to explain to others. Professor Rodman recommended two books co-authored by Michael Hardt and Antonio Negri, Empire and Multitude. In Multitude, the authors have envisaged a mass democratic global movement, mobilized by the Internet and social networking, to rise up to resist Empire. The multitude is marked by diversity rather than similarities. The challenge for the multitude in this new era is “for the social multiplicity to manage to communicate and act in common while remaining internally different.”

Professor Christopher Duraisingh provided a theological perspective. He said Occupy Boston reminds the Church of its prophetic witness. Biblical scholar Walter Brueggemann says prophetic witness involves the articulation of alternative consciousness to demolish and debunk dominant consciousness and providing the impetus for building a different community. Professor Duraisingh asked whether the Church has responsibilities to be involved in and support movements like Occupy Boston. Since the movement is against corporate greed, he challenged the Church to rethink its identification with corporate America.

The teach-in session was closed with Professor Rodman reminiscing about his student days in the 1960s during the height of the civil rights movement. He said Southern white students were ostracized after their classmate Jonathan Daniels was killed working for the civil rights movement in Alabama. It was the black students who reached out to them. He used this example to remind us there is going to be divided opinions on emotionally charged issues and asked us to listen to and care for each other.