Winston Churchill once said, “Initially we shape our buildings and then, thereafter, they shape us.” This is never truer than with our places of worship. By and large, these buildings, as beautiful as they can be, frustrate the purpose for which they were built, or the purpose for which they should have been built. They can stifle the formation of fully engaged Christians.

Today, in many places, church buildings are being built and existing ones remodeled to serve a new model of “church” (the people gathered), that harks back to the early days of Christianity. In these places people gather in community to offer praise and thanksgiving, to reflect on scripture, to share stories about Jesus Christ and his impact on their lives, to share a commemorative meal, and through this to come into communion with Christ, and with one another. These are communal activities, with many players, several centers of action and movement, and require the ability to see one another and feel as a gathered body.

The traditional forms of church buildings, with everyone facing in the same direction and with the “expert”; the intermediary or interpreter, on a raised stage addressing an audience is the antithesis of gathering in community. The ministry of all the baptized, the gift of the Holy Spirit that says we all have something to contribute, has no acknowledged place in this style of church building. Church as a spectator activity doesn’t engage people in the ongoing work of formation. Only buildings that encourage a sense of community and participation can create the apostles necessary to invigorate the Church.

One such church building is St. Paul’s Episcopal Church in Brookline, Massachusetts. Originally designed by Richard Upjohn at the high point of the Oxford Movement, that sees the Holy as dark, mysterious and unapproachable; the building was reconstructed after a disastrous fire that left only the four walls and the tower standing. [See the 1849 plan].
1849 Plan 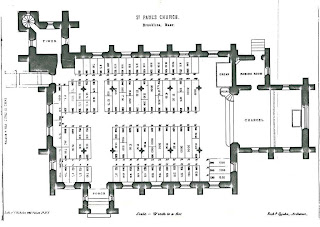 After two years of mourning, reflection, planning and discernment, the building was reconstructed in a centralized form. The former chancel was closed off to make a chapel. The altar which had been set against the east wall was moved a third of the way into the space. Dormers were added to the roof to flood the altar area with natural light, and the seating was wrapped around the altar on three sides with the choir seated on the fourth. [See the new plan]. 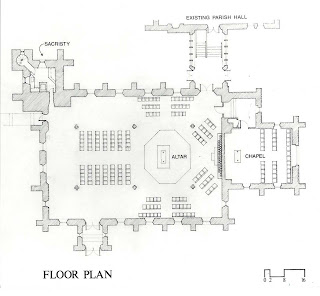 All the congregants are in close relationship to the altar area and members easily come forward to read scripture, assist with Communion and healing prayer, and offer announcements of mission opportunities and parish activities. Intercessory prayer is offered from the seated congregation, but because of the close seating arrangement, all can hear them. The altar, which is movable, sits on a platform around which the congregation gathers for Communion. As worshippers leave the circle to return to their chairs, others take their place. The priest and chalice bearer move around the platform, serving the bread and the wine, until all have received. 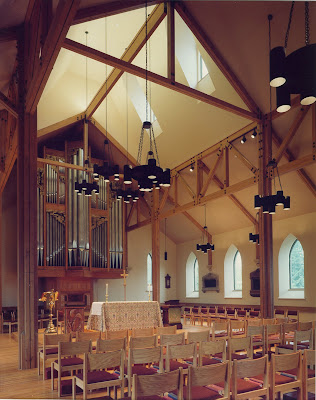 My last eight years as a trustee of Episcopal Divinity School, interacting with students and faculty, participating in worship and the classroom, have taught me the centrality of community in forming apostles and faithful people. I believe we need to rediscover our first century roots. Our theology demands it; the future of the Church demands it; creating the Kingdom here on earth demands it. Our designs of spaces for worship need to support it.


*Brett Donham is an architect whose practice includes churches. He is a trustee of Episcopal Divinity School.
(The photo shows St. Paul's Church Brookline, MA)
Posted by Kwok Pui Lan at 2:31 PM