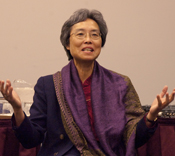 We start this new blog to share our ideas about how progressive Christianity can transform the world.

Every year we hear fabulous speeches and lectures at 99 Brattle Street. The faculty and students share new ideas about being a progressive Christian in the contemporary world.

In 1998, the faculty initiated EDS Occasional Papers, and we published the works of Manning Marable, Valerie Batts, Denise Ackermann, Bishop Barbara Harris, Iza R Hussin and those of our faculty. The circulation was about 350, with a copy sent to each of the seminaries and theological schools in . The Papers were discontinued because of a lack of funding.
Then some of the faculty began blogging and publishing in online journals. I became a blogger accidentally. I was watching President Obama’s speech in on June 4, 2009 and I had something to say. I checked with a professional guild of religion scholars and was told that it had no forum for comments on current affairs. Since my response was time sensitive, I sent it to a religious website, and it was published three days later. To my amazement a staff member and a student at the School told me the morning after it was posted that they had read it. They said it came to their attention via RSS.
We are witnessing a shift in media and communication more dynamic than that following Johann Gutenberg’s printing press of 1450. Before Gutenberg, there were about 30 000 books in , most of them Bibles and biblical commentaries. Many of us have seen those exquisitely handwritten and elaborately decorated medieval Bibles in European museums. Martin Luther would have died an unknown monk if his religious tracts and treatises had to be copied and were not popularized by the new printing press.
Today paper printing is being replaced by e-books and e-journals. “Still reading a book made out of paper? That’s so 2009,” says one commentator. Since Apple launched the iPad, an e-reader tablet, in April 2010, about 10 million units have been sold. With an estimated 3m Kindles and more than 1m Nooks sold, books on paper may become relics of the past, much like those handwritten Bibles. Barnes & Nobles recently reported that it sold more e-books than physical books on its Web site. On Christmas day alone, nearly 1m e-books were purchased.
Christian churches and theological seminaries need to learn to use the latest technology to communicate our message.
Through technology, EDSConnect provides resources for Christians in rural and small parishes and the School can offer a distributive learning option for students unable to study on campus at .
We are publishing this blog to encourage constructive debate and careful thinking, and to reach out to those who form part of God’s greater community. We welcome your comments and we hope to hear what you are doing to advance God’s kingdom beyond 99 Brattle Street.

(Note - we welcome your blog and comments, for editorial guidelines please write to comms@eds.edu. When writing a blog limit your word count to between 500 to 700 words and do a spell and grammar check US English before sending. Blogs on this site are the personal opinions of authors and do not reflect, unless specifically noted the views of the institutions they work for, nor do they necessarily reflect the views of Episcopal Divinity School.)
* Kwok Pui-lan is William F. Cole Professor of Christian Theology and Spirituality at the Episcopal Divinity School. She has written for Episcopal News Service and her blogs also appear in Religion Dispatches and Patheos.
Posted by 99 Brattle at 2:10 PM