Metanoia, while there is time

By Anne Primavesi
Thinking about global warming is hard work. It calls for reflection and action; for making connections between how we live day-to-day and how the planet “lives.” 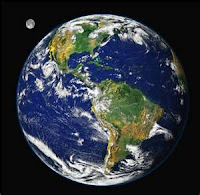 The planet keeps the temperature level comfortable for us and for all living things. They include the lifeforms that build and sustain our bodies, families, homes and cities by fertilizing and pollinating crops, generating oxygen and recycling water. This life-giving-and-receiving-activity extends to earth’s limits and beyond them. It includes the sun’s warmth and the weather systems that encircle the globe.
While we appear to interact almost exclusively with other human beings and with the products of human technologies, the creativity and productivity of beings other than ourselves is essential for our survival. So is the contribution of inanimate structures and systems such as ocean currents, cloud formations, and soil composition. We are human only by living with, in and through what is not human.
It means that every meal is a community event:
From air and soil
From bees and sun
From others’ toil
My bread is won.
And when I bite
The soil, the air,
The bees and light
Are still all there
Science has given us some insights into the scale and depth of this interconnectedness and continues to expand our knowledge of it. It has revealed how, since life first appeared on earth 3.5 billion years ago, and despite many adverse events such as volcanic eruptions and droughts, the planetary climate and temperature has worked as a self-maintaining system. It has kept itself within the narrow range needed to sustain life.
That works for and against us. As we are tightly coupled with this very complex system it is vulnerable to the effects of our activities. All living beings are vulnerable to the effects of our activities within that system.
This mutual vulnerability raises some difficult and important moral questions. As an individual, my actions appear to have no effect on the climate. So how could they affect the planet as a whole? Those actions are, for the most part, ignored or unnoticed by others, except for those immediately affected by them. How do I accept and deal with the notion that global warming is increasing because of rising carbon dioxide levels resulting from my activities and lifestyle?
This exposes an alarming gap between accepting responsibility, to some degree at least, for the effects of one’s actions on other individuals and accepting the fact that, as a species, over the past 200 years or so, human industrial activities and the demands generated by consumerist cultures worldwide are responsible for global warming which is impacting on all creatures worldwide, including ourselves.
Yet scientific research shows the increasingly lethal effects of human activities on the diverse life forms and inorganic planetary systems that constitute the boundless, priceless resource base on which global climate as well as all living beings depend. Their conservation is increasingly problematic because of our reluctance or inability to change our lifestyles and value them in terms other than monetary profit.
The problem is compounded by ignorance. We cannot begin to count most of the creatures upon whom our lives depend; nor do we know how they interact with and depend on others. Yet, we are beginning to realize that we are destroying this common resource base at a rate unparalleled in the history of life on earth.
Think about it and begin to see this as violence inflicted by us on all life.
We need to change; religiously it can be described as metanoia. Usually translated as “repentance,” this also means “to change one’s mind,” “to feel sorrow for or regret,” “to be of a new heart,” “to change one’s view and purpose.”
If not now, when? And if we don’t, who will?
* Anne Primavesi is an independent scholar, researcher, and freelance writer and lecturer. She is a Fellow of the Westar Institute and Jesus Seminar at . She is the author of Sacred Gaia (2000), Gaia’s Gift (2003) and Gaia and Climate Change (2009) all published by Routledge, and of Making God Laugh (2004) published by Polebridge Press.
Posted by 99 Brattle at 11:32 AM