The Conversion of a Conservative to a Liberal 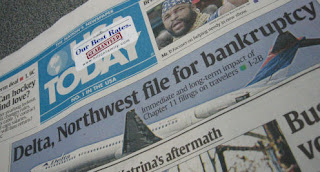 Growing up, I lived in a bubble. I saw the world working fairly well. My father had a successful small business in high tech carbide tool and die making. He had started it when his employer, a subsidiary of General Electric, was going to close its repair shop, which my father ran. He made a deal that he would continue the work as a private contractor and take on other customers as well. He and his partner worked hard and the company became a success. My brother subsequently took over when Dad retired and now my nephew has taken over from him. My niece also worked for the company and her husband still does. Through all their hard work, wisdom, and diligence, the company has prospered.

I went into aviation and flew first for Northeast Airline beginning in 1966 when I got out of five years in the Navy where I earned my wings. Then Delta bought out Northeast in the early seventies. Delta was originally run by some caring entrepreneurs and we were told we were a family. Then greed walked in, in the form of some savvy CEOs. Ten years into my retirement, they declared bankruptcy as some other airlines had done, and hired people back the next day at a fraction of their salaries. Meanwhile they dumped their retirees on the taxpayers through the Pension (partial) Benefit Guarantee Trust Corp. set up by Congress for the apparent purpose of enabling bad corporate behavior. The bankruptcies were related to the ruse of corporate raiding of pension funds during good times and then finding them short during bad times.

So I learned that not all corporations are created equal. Big business didn’t play by the same rules as small businesses. Looking at big business through historical lenses, it became clear that so-called free enterprise mainly meant that they were free to enlist the services of government and taxpayers through their so-called representatives to gain unfair advantage over competitors and labor.

Looking overseas, the picture appeared even worse. Colonialism and neo-colonialism have resulted in half the world struggling to subsist on less than $2 per day, while most wealth is held by the very few.  Now globalization and so-called free trade agreements have only accelerated the distance between rich and poor. 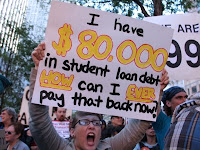 America is not left out, with financial game playing that resulted in a crisis and bank bailouts by taxpayers who were threatened that things could get even worse. Then foreclosures became rampant due to unemployment due to nervous markets due to all of the above. Then Occupy Everywhere arrived as bright young students burdened with debt supposedly to be paid off by cushy jobs figured out they had been had like the rest of us. They are using the same techniques as the Arab Spring only instead of malicious military dictators, the villain has become the oligarchy, the same oligarchy that was responsible for the dictators. It is a money game and Obama doesn’t know which side of the street he should stand on.

I used to believe, simplistically, that if government stayed out of the way, free enterprise would create utopia and private charity would take care of the poor, especially if our society was liberally sprinkled with conservative Christian virtues.

Now to my horror, much like Frank Schaeffer, I discover that I helped enable a government which with great hubris has spent trillions creating mayhem overseas under the pretense of protecting ourselves and democracy through its escalated war on terror which has become a cash cow for the military industrial complex that Eisenhower tried to warn us against.

Having just observed Veterans Day, we were treated on all channels to a depressing litany of ruined lives by those lured into the military by promises of $15,000 signing bonuses and college educations. Now left damaged and maimed, many of them have to sort out whether they were in fact saviors of democracy or pawns in a very sick money game.

What to do now? I suppose pray that 2012 will in fact bring about some new worldwide epiphany that changes things for the better.

* William Bronson, DMin ’08, was an airline pilot for many years and author of How to Get to Heaven.
Posted by Kwok Pui Lan at 9:25 PM