But Is That Theological?

By Mark Lewis Taylor
She reaches for the song that gets her through the day.
They break into a chant, and hold on tight as they are arrested together for protesting policies of torture in front of the U.S. White House.
He captures on video the faces of wounded survivors and images of the dead, burned by U.S. white phosphorous bombings in Fallujah, Iraq - galvanizing international critique of U.S. war-making in Iraq.
The years drag on in the refugee camp, but seemingly futureless youth, take up paint and imagination to color the camp walls in murals of fight and freedom.
These gestures of song, chanting with clasped hands, the video image gone viral, refugee youth painting murals on walls – could these be theological?
One early reviewer of my new book, The Theological and the Political: On the Weight of the World, found the book’s concepts tough-going, but helpful for answering his religious friends who dismiss his dearest language of devotion and struggle with the words: “But is that theological?”
It’s a question I often hear uttered by guardians of official guild Theology, about those who live under imposed suffering, and who find power for living in their arts – poetry, music, painting, and more - catalyzing their hope amid suffering. Is that theological?
Theologians, too, struggle with the question. What is the theological and theology, anyway? When theologians desire to write about what matters amid the unrepeatable tensions of our age, that desire often takes us to theories, arts and genres that are hardly the usual stuff of Theology.
We are led to reflect not simply on sites of suffering in general - anxiety, guilt, sickness, death. When the worlds of suffering are those of politically-sustained, social suffering, the discourses that matter most are often the popular arts. They often rival the seemingly intransigent forces that weigh heavily upon repressed peoples everywhere, who, nevertheless weigh-in with resilience against the everyday, callous mixes of colonialism, modernity and imperial power.
Go to the “Holy Land” to find the theological, I suggest. You won’t find it so much along the ways of the Jesus Inc. shrines and walkways. You’ll find it more among the Palestinian and Jewish ar 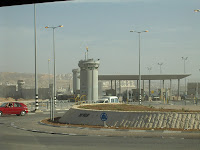 tists yearning to end Israel’s illegal occupation and miles of imprisoning wall.
The land is afflicted by a most unholy occupation, dividing and confining Palestinians, cutting across their lands, ruining hopes for jobs, land, a contiguous state, and, often, threatening dignity itself. Achille Mbembe sees Israel’s apparatus of power in Palestine, backed by the U.S. as “the most accomplished form of . . . late-modern colonial occupation.” Jewish historian, Illan Pape, writes of “the ethnic cleansing of Palestine.” 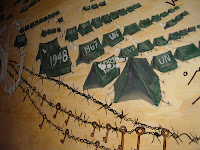 Yet the theological thrives. Artful gestures of resistance can be seen in the murals of the Dheisheh refugee camp, which I was permitted to visit and photograph. One muralist depicts the overall history, displaying the dates of upheaval that sent Palestinians into the camps or diaspora.
The Israeli caterpillar tractors that raze Palestinian homes are re-imagined as skeletons dealing death, but they too are now dying; they are bony things, confined by their own wall-building addiction. Artists implant these death machines in a cemetery of flowers, portending the death of Israel’s abusive machinations of power. 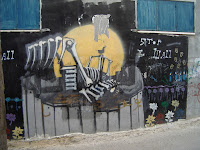 As in camps and communities of suffering the world-over, it is mothers and children, often together with the aged and the infirm, who suffer most. Yet even they can be conjured by the refugee artist as agents of power. Grasping the uprooted olive trees marking the Nakba,“catastrophic destruction” of homes, lands, and peoples, the mothers shown in the mural draw strength from the land, grasp their children and pose a veritable specter of liberation dwarfing the soldiers who enforce destruction in the name of a gruesome Pax Americana/Israelica. 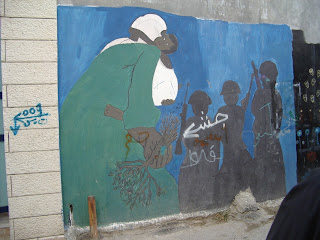 This art expresses and catalyzes quotidian practices of resistance, in part organized through its Ibda'a Cultural Center (“ibda’a” meaning “creativity”).
It is not the artful gesture alone that liberates. It is the art, intrinsic to a people, that sustains and catalyzes everyday resilience and challenges the powers that would reduce them to mere disposable peoples. That’s the theological.
* Mark Lewis Taylor is Professor of Theology and Culture, Princeton Theological Seminary. He took the photographs accompanying this text on a 2007 visit to Palestine and Jordan. His most recent book is The Theological and the Political: On the Weight of the World (Fortress Press, 2011).
Posted by 99 Brattle at 10:53 AM