Exploring Sex and Violence in the Bible 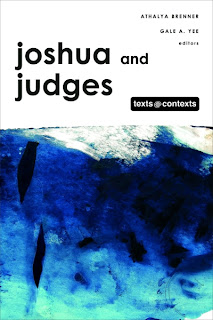 At a recent meeting of the Pacific Asian North American Asian Women in Theology and Ministry (PANAAWTM) at Garrett Evangelical Theological Seminary in Evanston, Illinois, one of my Old Testament colleagues introduced herself as someone who teaches sex and violence in the Bible at her seminary.

In the lectionary of the Episcopal Church, the only Sunday readings from the book of Joshua are stories about the Israelites crossing the Jordan and entering the Promised Land, bearing the ark of the covenant (Josh 3:7-17), their circumcision and eating of first Passover in the land (Josh 5:9-12), and their renewal of the covenant, now that they are settled in the land (Josh 24:1-3, 14-25).

Completely passed over are the horrific stories of the genocide of the indigenous Canaanites at God’s command. The only story from the book of Judges in the lectionary is one about the prophet Deborah commanding Barak to take up a military position on Mt. Tabor against the armies of the Canaanites (Judges 4:1-7). Completely ignored are the many stories of the violence against women in the book, which ends with the gang-rape of a woman and her dismemberment and the seizure and rape of 600 more women (Judges 19-21). Both books have terrible legacies. The book of Joshua has been used to legitimate the conquest, colonization, and extermination of many indigenous people across time and around the globe. Violence against women is still an appalling aspect of our societies even in this “enlightened” era.

Acknowledging the specific socio-cultural contexts from which the contributors write, Joshua and Judges, the essay collection that I edited with Athalya Brenner, confronts the issues of sex and violence in these books head on.

Well-known biblical scholar, Walter Brueggemann tackles the hermeneutical dilemma in Joshua that describes God decreeing violence so that Israel can occupy a land already inhabited by other peoples. The violence stems from the uncritical view that Israel’s covenantal chosen-ness that demands the negation of the Other, the Un-chosen. Two Israeli educators, Yonina Dor and Naomi De-Malach, examine the wide range of Jewish attitudes about the book Joshua, those that provided ideological support for Zionism, conquest of the land, and the expulsion of its residents, and those that feared that the book would sanction further violence in Israel.  Daniel Hawk surveys the parallels between the ways in which biblical Israel and American Manifest Destiny construct national identity through stories of conquest.

The essays on Judges particularly focus on the women and gender issues in the book from the social locations of their contributors. My co-editor, Athalya Brenner, argues that women intentionally framed the book of Judges by design. Three contributors examine the tent-peg wielding assassin, Jael (Judges 4-5).  Ora Brison sees in Jael a strong independent woman that offsets her experience of abused and humiliated women in her work in an Israeli women’s shelter. Ryan Bonfiglio interprets Jael and her choice to kill or not to kill Israel’s enemy general, Sisera, from the perspective of the choices his immigrant Italian grandparents faced when they settled in the US.

I see parallels between Jael and the Chinese woman warrior, Fa Mulan, highlighting the American Orientalism of Disney’s Mulan and its influence on the gender formation of young Asian American females. Royce Victor reads Delilah through the lenses to two significant Indian literary works, the Ramayana and the Mahabharata. Brad Embry interprets the horrible story of the Levite’s concubine’s rape (Judge 19) from his specific religious context: the Pentecostal-Holiness Assembly of God tradition. Examining the male judge Gideon, Bar Mymon observes that Gideon puts on his masculinity the way he (Bar Mymon) dons his Israeli military uniform and becomes the Man, in a severe process of gender deconstruction and reconstruction.

The people in the pew are most likely unaware of the sex and violence embedded in the books of Joshua and Judges, since their stories are rather censored in the Sunday lectionaries. Nevertheless, I urge congregations to read and study these stories together to see how awfully familiar they are to present-day happenings. My students in my Introduction to the Hebrew Scriptures have their eyes wide-opened when they read these narratives. I remember one of my students saying that she now hesitates to teach children the popular song, “Joshua fit the battle of Jericho,” because it calls to mind the atrocities committed against the indigenous Canaanites described in Joshua. I am hopeful that this volume of collected essays continues the very needed conversation we need to deal with the military and sexual violence endemic to our society.

Posted by Jeffrey Perkins at 10:41 AM