The Food and Feasts of Jesus

By The Rev. Douglas E. Neel
“Cuisine is the very symbol of civilization and culture.”
—Massimo Montanari, Food is Culture
If Montanari is right—and my friend and co-author Joel A. Pugh and I believe that he is—then we must comprehend first century food, food production, and Jewish feasting to truly understand Jesus and his teachings. 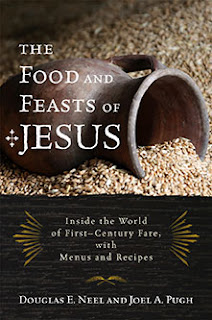 Many types of first-century meals were a combination of worship and dinner party. Cooks used the best and freshest ingredients they could grow or afford. Even the weekly Sabbath Feast was a unique culinary offering eaten with family and friends. These meals defined their culture.
The parables of Jesus frequently make reference to food production. He attended banquets and religious feasts. He even gave advice on where to sit and how to act at a special dinner. The Palestine of Jesus’ day had an agrarian economy with a simple food-based social safety net. We believe that Jesus realized it was failing under the policies of taxation by Herod, his sons, and the Romans.  This was also reflected in his teachings.
Doing the research for writing The Food and Feasts of Jesus was fascinating. Not only did we survey a number of primary and secondary sources, we also used foods, ingredients, and cooking techniques that were available in ancient Palestine to prepare our own meals. We made wine, bread, cheese, beer, and yogurt. We brined raw olives and grew our own herbs. We wrapped fish in fig leaves and buried in coals to cook.  We pickled radishes and onions and dipped hard-boiled eggs in fish sauce. We sat on the floor, reclined on cushions and ate lentils with our hands. Readers tell us that they enjoy the combination of theology, history, and culture with menus and recipes. For example, the chapter on first-century weddings ends with the recipes needed to create your own experience of the ancient feast. Our hummus recipe is probably worth the price of the book.
Studying ancient Jewish feasts helps us understand our own food culture. What foods and meals define our culture?  Take out hamburgers and fries from a drive-in window?  Fruits and vegetables with carbon footprints that can be traced halfway around the world? Dinners hurriedly eaten at the desk or in front of the television?
I am including a sample recipe that readers tell us they especially enjoy.

Braised Chicken with Figs and Apricots

Salt and pepper the chicken thighs and dredge them in the flour.  Brown them, three or four at a time in a 14 inch skillet or 5 quart Dutch oven. Remove the chicken and sauté the onion in the same pan until it begins to caramelize.  Add the garlic and cook for another minute.  Return the chicken to the pan and add the rest of the ingredients.
Bring the liquid to a boil and then reduce to a simmer.  Cover and cook for 40 to 45 minutes until the meat easily pulls away from the bone, turning the thighs from time to time.  Uncover and remove the chicken.  Cook for an additional 5 minutes to thicken the sauce.  Adjust the seasoning if necessary by adding additional salt or pepper. Place the chicken on a serving dish and cover with the sauce.  Or return the chicken to the Dutch oven and use it for the serving dish. Serves 8
Instead of finishing the cooking time on top of the oven, cover and place in a 350° oven.  If you cannot find dried figs, simply use dried apricots.
Recipe reprinted from The Food and Feasts of Jesus, Douglas E. Neel and Joel A. Pugh (Lanham, Maryland: Rowman & Littlefield Publishers, 2012), 90.
Douglas E. Neel is an Episcopal priest in the Diocese of Colorado, serving St. Patrick Episcopal Church in the mountain resort community of Pagosa Springs. He owned a catering company in Dallas specializing in first-century culinary experiences and continues to lecture and teach classes on ancient food and feasts. In his free time, he makes his own bread, cheese, beer, and wine.
Posted by Jeffrey Perkins at 11:37 AM

Email ThisBlogThis!Share to TwitterShare to FacebookShare to Pinterest
Labels: Jesus, Joel Pugh, The Food and Feasts of Jesus, The Rev. Douglas Neel