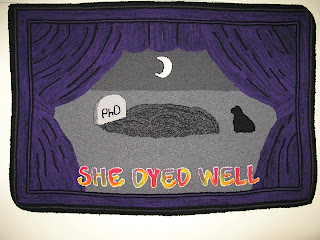 About twelve years ago, I was laughing with my rug-hooking friends about the play on the words “die” and “dye.” In my craft we dye a lot of the wool we use because color is very, very important to us. So, I decided to make my epitaph rug. (See photo right.) I really like this rug even though it is much cruder than what I usually do. Laugh and the world laughs with you, cry and you cry alone.

Since I was in my thirties, I have said and believed that I would live to be 100 with my wits about me. They say that if you tell God your plans, she laughs. Well, we will all have to wait to see how hard God laughs at me. However, the one thing I have never given a thought to is the death of others that would surround me as I went about facing my own old age. Death comes for us all.

Looking death in the face is what my sister, Sue, has had to do. Last year, she was diagnosed with a quick moving, fatal form of cancer. She told me that she was going to commit suicide before her illness became too debilitating. I could understand how she felt on a rational level and I told her that for what it was worth, I supported her in her decision.

My daughter, Chris, and I made the very long journey to Sue’s home in the Upper Peninsula of Michigan last fall to visit Sue. I talked to her in late July and she said that she thought that she had come downstairs from her bedroom on the second floor for the last time. That was indeed grave news.

Shortly after that Sue began to receive hospice care. While her son, Adam, was away retrieving a hospital bed to put on the first floor for Sue’s use, Sue felt very poor indeed and called an ambulance to take her to the hospital where she died a few hours later.

So even though Sue was determined to take her own life whenever she saw fit to do so, she advanced in her illness to receive hospice care. Even though she was in hospice care, when things got dicey, she chose to go to a hospital for traditional treatment that might prolong her life. It is good to have options and choices. Sue died on August 6th.

Sue chose to live as long as she could. My brother chose a different route.

Four weeks ago I was sitting in an easy chair looking at the day’s mail when a policeman came to my door. He informed me that “they” had been looking for me all day because my brother, Mark, had taken his life in the early hours of that day, but had left no contact information in his apartment except that of his ex-wife.

I was shocked by Mark’s death, but not surprised. He was so bitter, so depressed, and so turned in on himself that there really could be only one end, the one he chose. Is death important at all? One wonders. Look at all the people and other living things that have lived lives before us on this planet. Everything dies. We all die.

Is it our human ego, our personal sense of self worth that makes us think that the ending of our life would be very important in the general give and take of our days? I started asking people about death months ago. What I concluded was that the people around me did not seem very fearful of death itself, but rather of not having autonomy in the last days of life, of not having choices. Choices mean ego involvement.

But when you think of all the death that has occurred and is occurring right now all around us, we can see that our own deaths are pretty inconsequential in the big picture. So what is important?

Here is the beginning of a great sermon! But, I’ll save you all that today and just say that when each of us looks death in the face, can we do so knowing that we have loved and loved and loved? Can we love so much in life that our love and kindness and caring is all given away by the time when we die?

The Rev. Dr. Emily K. Robertson (MATS ’06) is the Co-Pastor of the First Church of Squantum, Congregational, in Squantum, Massachusetts, and an award-winning rug-hooker whose works have been exhibited frequently and published in magazines.

Posted by Jeffrey Perkins at 9:34 AM