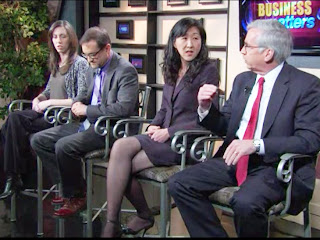 When I was growing up, my dad would often speak for me. He would introduce me to his friends and then start talking to them on my behalf. He would answer questions that were directed at me and often responded in ways in which I would not have responded. He did this, at least in part, because my Korean speaking ability was very limited. However he also spoke for my sister and my mother.
I was recently invited to speak on “Business Matters” hosted by Tony Iannelli (Channel 69 in Lehigh Valley, Pennsylvania). I was one of the four panelists, joining Kate Wilgruber from Allentown Women’s Center, Dr. Larry Chapp, De Sales University, and Attorney Richard Connell, who were invited to debate the inclusion of coverage for contraceptives in health care packages. The two male panelists were against the inclusion of contraceptives in health care coverage and the two women panelists were for the inclusion.  The debate was lively and sparked good conversation as some spoke from their personal religious beliefs and encounters with women who are in need of good health care.
I frequently disagreed with Dr. Larry Chapp who is a Roman Catholic Theologian teaching at De Sales University, a Roman Catholic college. He argued against the morality of using contraceptives and objected to the mandate of providing contraceptives within Roman Catholic institutions and based his argument on the First Amendment. I argued that the current Roman Catholic position on this issue went against Freedom of Religion. A person working in a Roman Catholic hospital, university, institution is not the same as joining a church and should be given the benefits of any employer working in a non-religious workplace.  A worker employed in a Roman Catholic institution does not have to ascribe to the teachings of the church or even need to believe in the Christian God to be employed there.  Thus, it would be against the First Amendment to impose Roman Catholic teachings on the workers and not cover the use of contraceptives for their women employers.
Protestants believe that sex is not only for procreation as it is a gift of God. However this understanding is also inherent in the only sanctioned birth control method allowed by Roman Catholic Church, the ‘rhythm method.’ With this condoned method there is a recognition that sex does not always lead to procreation. If they truly believed sex was only for procreation why would they even permit the rhythm method?
During Vatican II Pope John XXIII asked a commission to examine marriage. The commission consisted of women, laity, priests, and bishops and at the end of the study period the commission endorsed the use of contraceptives. It was later in 1968 that Pope Paul VI issued Humanae Vitae which reported that contraceptives should be banned and overturned the commission’s earlier report. Why wouldn’t the commission—which included women and heard the important voices of women on a concern related to women’s issues, bodies, health, respect, dignity and well-being—have more validity than men speaking about women without consultation.
As I ponder the argument that the Roman Catholic Church is using today, I cannot help but think about how my own father used to speak on my behalf, answer on my behalf, and tell others how I felt.  I want to ask today, when will men stop speaking on behalf of women especially when it pertains directly to women’s issues?
I am now a mother of three children and no longer allow my dad to speak on my behalf. I believe women of all faith traditions should speak up loud and clear on issues which affect their everyday lives and fight for our human rights.

Grace Ji-Sun Kim is Associate Professor of Doctrinal Theology and the Director of the MATS program at Moravian Theological Seminary in Bethlehem, Pennsylvania. She is the author of The Holy Spirit, Chi, and the Other: A Model of Global and Intercultural Pneumatology (Palgrave Macmillan) and The Grace of Sophia: A Korean North American Women's Christology(Pilgrim Press).
Posted by Jeffrey Perkins at 9:38 AM