What Would It Take to Move the Map? 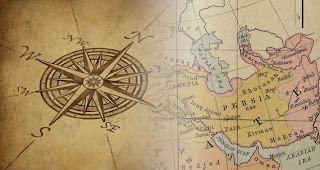 Maps, whether real or mental, omit as much as they show.
In our universities and seminaries, the early history of Christians and Jews in the West is studied in exacting detail, but it is often a one-sided process: the movement of Christians and Jews—and Muslims—to the East is largely ignored.
There is increasing evidence of a rich history of Christians, Jews, and Muslims who moved eastward all the way to China, at a time much earlier than was previously believed. There is, in fact, an entire “lost history” of these groups in the East, not because the evidence is not available or accessible, but simply because our universities and seminaries choose to ignore it.
The “What Would It Take to Move the Map?” conference is organized to address the simple yet fundamental question: What would it take to move the map to include a more inclusive history by introducing eastern narratives into this early history?
It is partly a matter of reintroducing some of the new findings about these groups in ancient Armenia, Syria, India, Inner Asia, East Asia—which some of the experts at this conference will do. But this conference will also encourage participants to reflect on the challenges and benefits of integrating an eastern history into the bigger picture. For instance, how can this realignment of the map and expansion of historical themes teach us about movements of religious groups in other areas, say, in Africa or South America—or the United States?
Modern global issues demand that we think anew about the interconnections and take measures to integrate the history of the East and West. It is natural for people in the West to have been more interested in “their” history, but from the beginning there have been non-Europeans present whose history was simply ignored. Is European and American history “their” history? What happens when more and more people in the West are from Africa, the Middle East, or South or East Asia? What happens when more of the West’s relations are with the East? The broadening of the historical map goes hand-in-hand with the broadening of the modern map, which is becoming increasingly complex. This conference will provide a forum for essential conversations on integrating new historical knowledge with our common maps, laying the foundation for a more thorough and complicated understanding of modern global concerns.


Dr. Lawrence Wills is the Ethelbert Talbot Professor of Biblical Studies at Episcopal Divinity School and author of Not God’s People: Insiders and Outsiders in the Biblical World.


“What Would It Take to Move the Map? Abrahamic Religions on the Silk Road” is a one-day conference that will take place at Episcopal Divinity School on Saturday, March 3rd from 9am to 6pm. The conference will explore the overlooked histories of ancient Judaism, Christianity, and Islam in the Middle East, India, and East Asia. This conference is part of EDS’s interfaith initiative funded by a generous grant from the Henry Luce Foundation of New York. For more information visit www.eds.edu.
Posted by Jeffrey Perkins at 9:35 AM