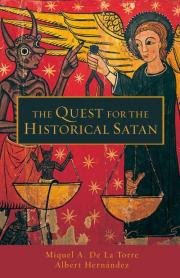 By Miguel A. De La Torre and Albert Hernández

The search for the historical Satan is an attempt to justify God’s grace while legitimizing the reality and presence of evil in human history. The biblical text does not begin by introducing its readers to Satan as the Prince of Darkness and enemy of God whose primordial spiritual warfare continues to manifest itself in our times. Rather, this concept developed over centuries as religious ideals commingled with popular culture and the flow of history.

We argue that a simple good versus evil binary understanding of reality leads to an ethical perspective that might cause more evil than good. A world where everyone and everything is either with or against God leads to great atrocities by those “with God” in their defense against the perceived threat of those “against God” (who those on God’s side usually define as Satanic).

What if instead our understanding of Satan was influenced by the concept of the “trickster” figure, which seems to be present in the Hebrew Bible? Learning to interpret Satan as the ultimate trickster, rather than the embodiment of absolute Evil, can lead to ethical praxes that are more liberative because they deal with the causes of oppressive structures in the physical world rather than simply blaming the present reality on the metaphysical reality of evil or on the moral depravity of humanity.

We propose to return to the early biblical Satan because it leads to a better ethical framework from which to operate in the bringing about of justice and redemption. For example, Satan in the book of Job leads Job beyond simplistic theodicy solutions that assume unfortunate circumstances are the result of God’s punishment for peccadilloes. The Satan who confronts Jesus in the desert helps Jesus, in all his humanity, to understand his own divinity and the important public ministry he undertakes after the sojourn in the desert.

Satan as trickster serves a crucial role. Can we as humans ever truly advance without moral conflict? Without tragedy? Without struggle? How do we practice righteousness unless there is temptation in our lives? Although Satan as a trickster-hero becomes a scapegoat upon which humans can project their unrealized aspirations, their fears, and their failures his trials and tests force humans to flex their moral muscles and, in the process, raise their own consciousness and self-knowledge.

Without the darker side of the spiritual, we might never strengthen our own resolve to do good. In the final analysis, Satan as trickster is an agent of change. And here is the ultimate paradox: Satan as trickster teaches humanity how to walk humbly in the paths of the Lord. While possibly taking pleasure in testing human weaknesses and strengths, Satan can create situations that can lead humans to make proper moral choices.

God can use Satan, as God did in the case of Job and Jesus to assist those who are seen as “non-persons” to uncover their identity and the causes of their station in life. The situations in which the marginalized find themselves, due to these “satanic” forces, becomes the starting point for all critical analysis. God can also utilize Satan to cause those who benefit from the status quo to discover their own salvation. Oppressors and sinners are also trapped in structures that dehumanize them due to their complicity with repressive structures.

Viewing Satan as trickster is not without problems, specifically the ambiguity that exists between Satan and God—an ambiguity that can find its full expression in the trickster figure. Rather than being God’s antithesis, God’s opposite, a certain ambiguity, if not complimentary position, is held by Satan.

If Satan has no power except that given by God, we are left wondering whether evil can come from God, a proposition that the early biblical writers and ancient Church Fathers like Augustine raised. We heard the prophet Amos asking “If there is evil in a city, has Yahweh not done it?” (Amos 3:6). More disturbing is the passage where God sends evil spirits to torment King Saul (1 Sam 18:10).

Such a proposition has the potential of dismissing any notion regarding God’s ultimate goodness. Once we eliminate Satan as some type of quasi-deity who can be blamed for all of the evils, which befall humanity, we are left asking if God has a dark side. What is more, if Satan is only carrying out God’s divine will, then does this mean that God is the ultimate trickster?

*This article is based on Miguel A. De La Torre and Albert Hernández, The Quest for the Historical Satan (Fortress Press) scheduled to be released August, 2011.

** Miguel A. De La Torre is Professor of Social Ethics at the Iliff School of Theology and his most recent book is Latino/a Social Ethics: Moving Beyond Eurocentric Moral Thinking (Baylor University Press, 2010). Albert Hernández is Associate Professor of the History of Christianity at Iliff School of Theology and is the author of Subversive Fire: the Untold Story of Pentecost (Emeth Press, 2010).